Unix is one of the operating system which is made up of three parts.

The kernel is the core of the Unix operating system. It allocates the time and memory to the programs and handles the communications is response to the system calls.

The Shell acts an interface between Kernel and User. The Shell is a command line interpreter (CLI). It interprets the user commands and arranges them to be carried out. In other words, Command Interpreter that turns text that you type (at the command line) in to actions.

The commands are themselves called as programs in Unix. The UNIX shell program interprets user commands, which are either directly entered by the user, or which can be read from a file called the shell script or shell program. Shell scripts are interpreted, not compiled. 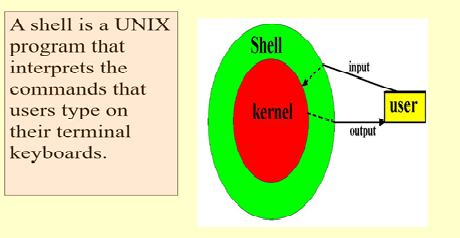 Below are the different Popular Shell Types:

Bourne shell has the following subcategories

All the data in Unix is organized into files. All the files are organized into Directories. The people working in Unix will spend most of the time in working with files.

Following are the types of file management system in Unix.

This is a normal text file on the system that can contains any details on it.

The directories in the Unix File management is the storage of files. In other words, it can be called as folders in windows.

How to list the files and directories in Unix?

In the above output, file.txt, test.1, test.2 and bin are files and directories.