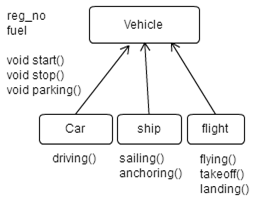 A subclass can be inherited by another class.

A subclass can access all the members of the superclass except those which are declared as private.