In object oriented programming languages, classes and objects are the basic elements of a program. Messages are passed only through objects.

An object is an entity, which possess some properties and behavior. Example – Person is an object with properties – Name, Gender, etc and with behavior – sleeping, eating etc.

A group of objects having similar properties and behaviour are enclosed within a class.

The class ‘Bird’ would have the properties and behaviour which are common to all its objects – peacock, parrot etc.

Properties and behaviour of objects are referred to as data members (fields/variables) and methods respectively.

Object is an instance of class. In other words, they are variables of the type class.

Once a class is created, objects of that class are created by using it’s class name.

Accessing the fields and methods of a class:

The fields and methods of a class can be accessed by using the ‘dot’ operator. 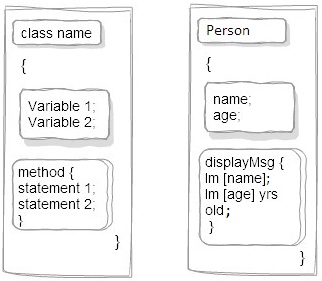 We have two classes in a same source file. Then, which name should we use as a file name?

You have to use the name of the class containing main() method. so we save the above source file as UsePerson.java.

A Java application can have any number of classes but atleast one class should contain a main() method. During runtime, the JVM will search for the main() method and start executing the statements in main() method.

Using Person class, you can create any number of objects of type Person using new() operator.The syntax is,

To create an object for Person class, we use

new Person() will create a object of type Person.
personOne is a variable name referring to the Person object.

The name variable of personOne object is specified by personOne.name

similarly, the age variable of personOne object is specified by personOne.age