Three things need to be done to make a java program work. They are, 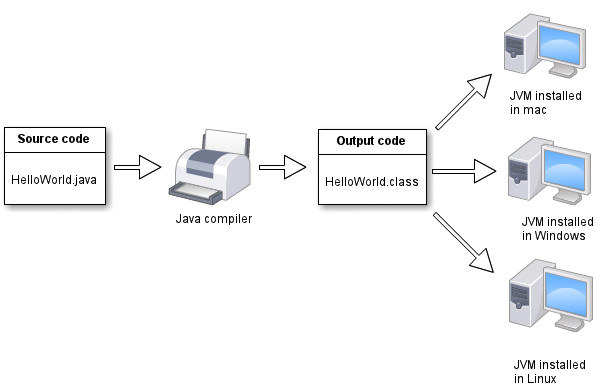 Type the above program in a notepad and save the file with the name that should match exactly with the class name and with .java extension. That is HelloWorld.java

Open command prompt and go to the directory where HelloWorld.java is located and type the command

The program will be compiled by javac compiler and HelloWorld.class file is created and ready to be executed.

Then, type the command.

This command will execute the class file and displays the output ‘Hello World’.

Need to install jdk latest version and JRE. Otherwise, you can try using an IDE like RAD or Eclipse to create, compile and execute Java programs.

A simple/Basic Java Program with explanation:

Note: Java is case sensitive and hence make sure that the class name and the filename matches.

The class file generated is executed by the following command.

The class name alone is passed to the java interpreter, which identifies the class file and interprets the bytecode information.

A Java Application begins its execution from the main method.

The string array ‘args’ is used to pass any command line arguments while running the program.

The above line is a statement. Every statement ends with a semicolon. The print() method is used to display the string specified. System.out refers to the object which represents the console. System is a class defined in java.lang package. This package is imported by the JVM implicitly. Packages are explained in the end. ‘out’ is an instance of the PrintStream class.

The braces {…} marks the beginning and the end of the class, method and block.

The above line represents a comment. Comments are used for the purpose of the user and it is not executed by the program. There are 3 kinds of comments in java.

Used for single line comments. Everything after the ‘//’ is ignored

Used for multiple line comments. Begins with /* and ends with */

Doc comments are ignored by the compiler, but they can be extracted and automatically turned into HTML documentation by the javadoc tool.

Example : @author, @version, @exception, @param, @return are some of the doc comments each having its own meaning.

The import statement in the above class, would load all the classes and interfaces present inside the java.io package.