L.C.M (Least Common Multiple): The least number which is exactly divisible by each one of the given numbers is called their L.C.M.

Factorization Method: In this it resolve each one of the given numbers into a product of prime factors. The product of the highest powers of all the factors gives us LCM.

H.C.F. and L.C.M. of Decimal Fractions = If the given set of numbers has decimal fractions, then first of all make the same number of decimal places by suffixing zero(s) if required. Thereafter, treat these numbers without decimal point as integers and find HCF/LCM as required. In the result, put a decimal point leaving as many digits on its right as there are in each of the numbers. 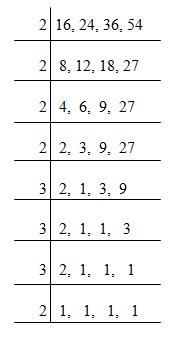